“Will be used by campaigners as a basic handbook to explain our recent history” says John McDonnell, Shadow Chancellor, about the book The Failed Experiment, written by the controversial Croydonian Andrew Fisher who is an economic advisor to Jeremy Corby and McDonnell. Andrew is also a speaker at this Saturday’s Croydon Assembly at Ruskin House, along with John McDonnell as key speaker.

In the book Andrew argues that it is politicians not bankers that must take most of the blame for 2008 financial collapse. This is an unusual analysis that cannot be ignored. It was the credit crunch that exposed the frailties of a failed economic experiment.

In the last thirty-five years, politicians of all parties in government ceded power over fundamental sectors of our economy to a new oligarchy of corporations. Government has become the servant, not the master, of corporate interests. Andrew describes this as a failed political experiment; an analysis that makes this book very different.

It is not about blaming the bankers, or even high powered financiers – though much blame and opprobrium has rightly been apportioned to them. Nor is it a partisan attack on the failures of Conservative or Labour governments. Instead, this is a book about the much larger political crisis that still threatens our living standards – and how we can resolve it.

Andrew is cofounder of the Left Economics Advisory Panel and writes for its LEAP Forward website..

Postings on LEAP include:

and Andrew on the state of the labour market: 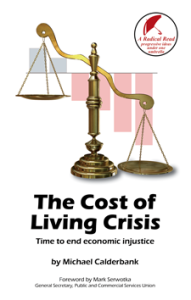 The Failed Experiment is published by  the Radical Read project  which also publishes The Cost of Living Crisis by Michael Calderbank. John McDonnell, Shadow Chancellor describes the book as “An invaluable weapon in the hands of all those refuting and rejecting austerity.”

Calderbank argues that at a time when the rich are allowed to grow even wealthier, governments have imposed an unjustified programme of austerity, and at a time when low paid work has become endemic. It is an act of economic injustice that must be corrected. The author delivers an uncompromising message to the political elite; it is time to end the politics of austerity, an ideological project to cut the size of the state permanently. In its place, we need a positive programme, with priority given to defending the public services, curbing excessive profits, taxing the obscenely rich and, at the same time, stimulating the economy by increasing the spending power of all wage earners.

Both books will be on sale at the bookstall I am running at the Assembly,  as will the titles of my History & Social Action Publications imprint.

Both sets of titles can also be ordered from:

A talk by Andrew last year at Matthews Yard triggered the setting up of the Croydon TUC  working party that reviewed the Council’s Growth Plan, which in turn influenced my evidence to the Whitgift Centre CPO Inquiry.

Since moving to Norbury in July 2011 I have been active on local economy, housing and environment issues with Croydon TUC and Croydon Assembly. I am a member of the Love Norbury Residents Associations Planning & Transport Committees, and Chair of Nobury Community Land Trust. I write for Croydon Citizen at http://thecroydoncitizen.com. I co-ordinate the Samuel Coleridge-Taylor and Croydon Radical History Networks and edit the North East Popular Politics database. History Project.. I give history talks and lead history walks. I retired in 2012 having worked in the community/voluntary sector and on heritage projects. My history interests include labour movement, mutuality, Black British, slavery & abolition, Edwardian roller skating and the social and political use of music and song. I have a particular interest in the histories of Battersea and Wandsworth, Croydon and Lambeth. I have a publishing imprint History & Social Action Publications.
View all posts by seancreighton1947 →
This entry was posted in Andrew Fisher, austerity, bankers, Cost of Living, Croydon Assembly, Failed Experiment, History & Social Action Publications, Jeremy Corbyn, John McDonnell, Left Economics, Radical Read project, Second hand books. Bookmark the permalink.