I will be leading this walk.

This walk is a Friends of Tate South Lambeth Library event, in association with The Vauxhall Society/vauxhallhistory.com, and is part of English Heritage’s dual celebration of the birthday of the England’s national bard, Shakespeare (26 April) as well as of St. George’s Day, 23 April, feast day of the patron saint of England.

This walk will centre on the St George Wharf/ MI6 stretch of the Vauxhall riverside and cover local history, past and present, in particular the question of local identity.

Labour and Conservative Mayors of London as well as Lambeth councillors have junked local ‘affordable property’ rules in favour of under-occupied skyscraper apartment blocks and their absentee-owners. The Vauxhall riverside has become the site of central London’s first fatal aircraft crash (2013), and after a dubious ‘consultation’ the 14-year-old Vauxhall Bus Station is to be demolished.

‘Cry God for Harry, England and St. George!’, is the battle-cry of Shakespeare’s King Henry at the Battle of Agincourt (1415).

According to who you speak to, St George, a soldier, was born in what is today’s Palestine or in Turkey about 280 AD. In AD 303 the Romans beheaded St George for opposing the persecution of Christians and refusing to recant his faith. St George’s tomb is at Lod, Israel. Rome ceased to regard St. George as a saint in 1975.

Note these Vauxhall Society/Vauxhall History walks dates in your diary:

The Heyday of Vauxhall Gardens

All comers welcome. On-the-day donation of £5 to the Friends of Tate South London Library equally welcome. 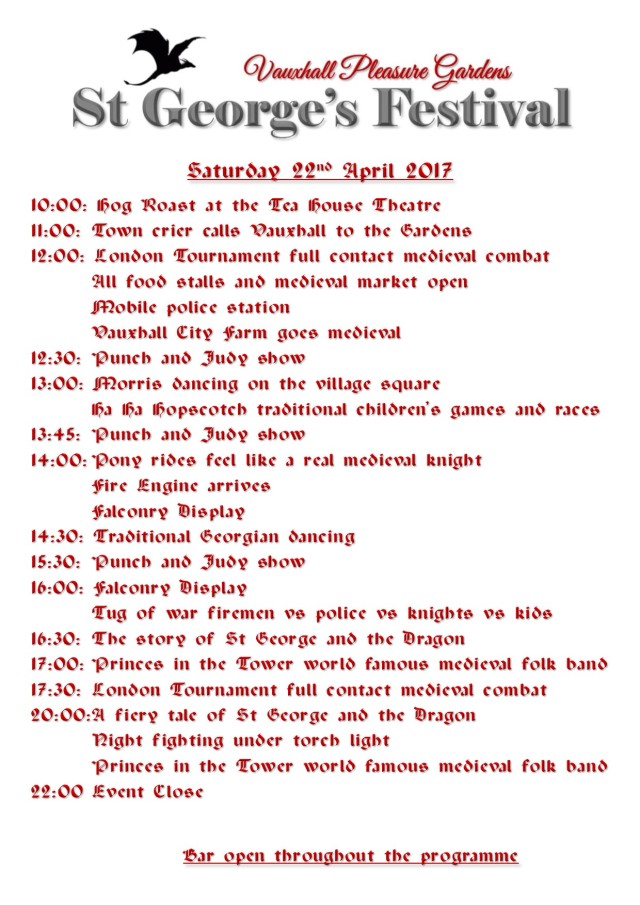 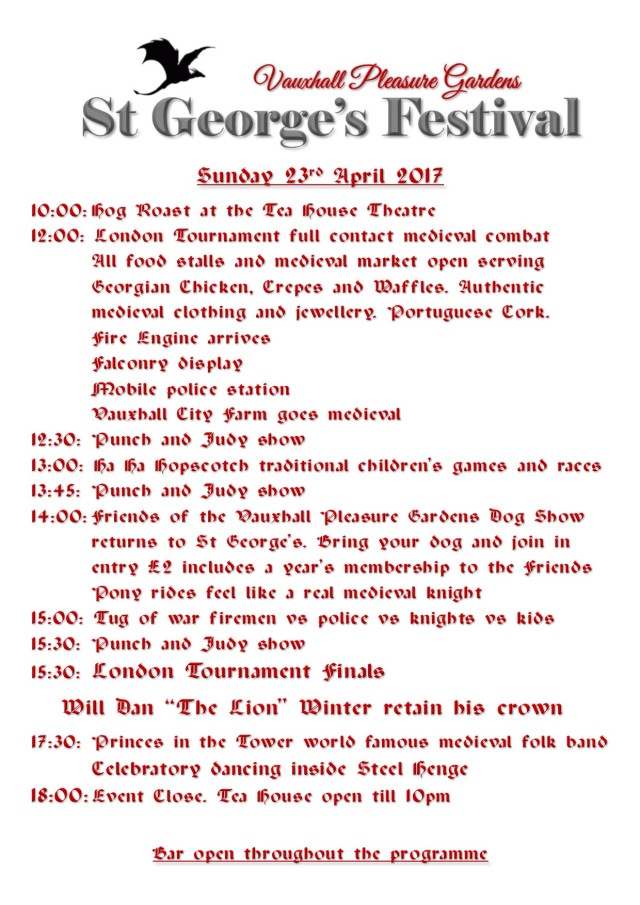 Since moving to Norbury in July 2011 I have been active on local economy, housing and environment issues with Croydon TUC and Croydon Assembly. I am a member of the Love Norbury Residents Associations Planning & Transport Committees, and Chair of Nobury Community Land Trust. I write for Croydon Citizen at http://thecroydoncitizen.com. I co-ordinate the Samuel Coleridge-Taylor and Croydon Radical History Networks and edit the North East Popular Politics database. History Project.. I give history talks and lead history walks. I retired in 2012 having worked in the community/voluntary sector and on heritage projects. My history interests include labour movement, mutuality, Black British, slavery & abolition, Edwardian roller skating and the social and political use of music and song. I have a particular interest in the histories of Battersea and Wandsworth, Croydon and Lambeth. I have a publishing imprint History & Social Action Publications.
View all posts by seancreighton1947 →
This entry was posted in Uncategorized. Bookmark the permalink.